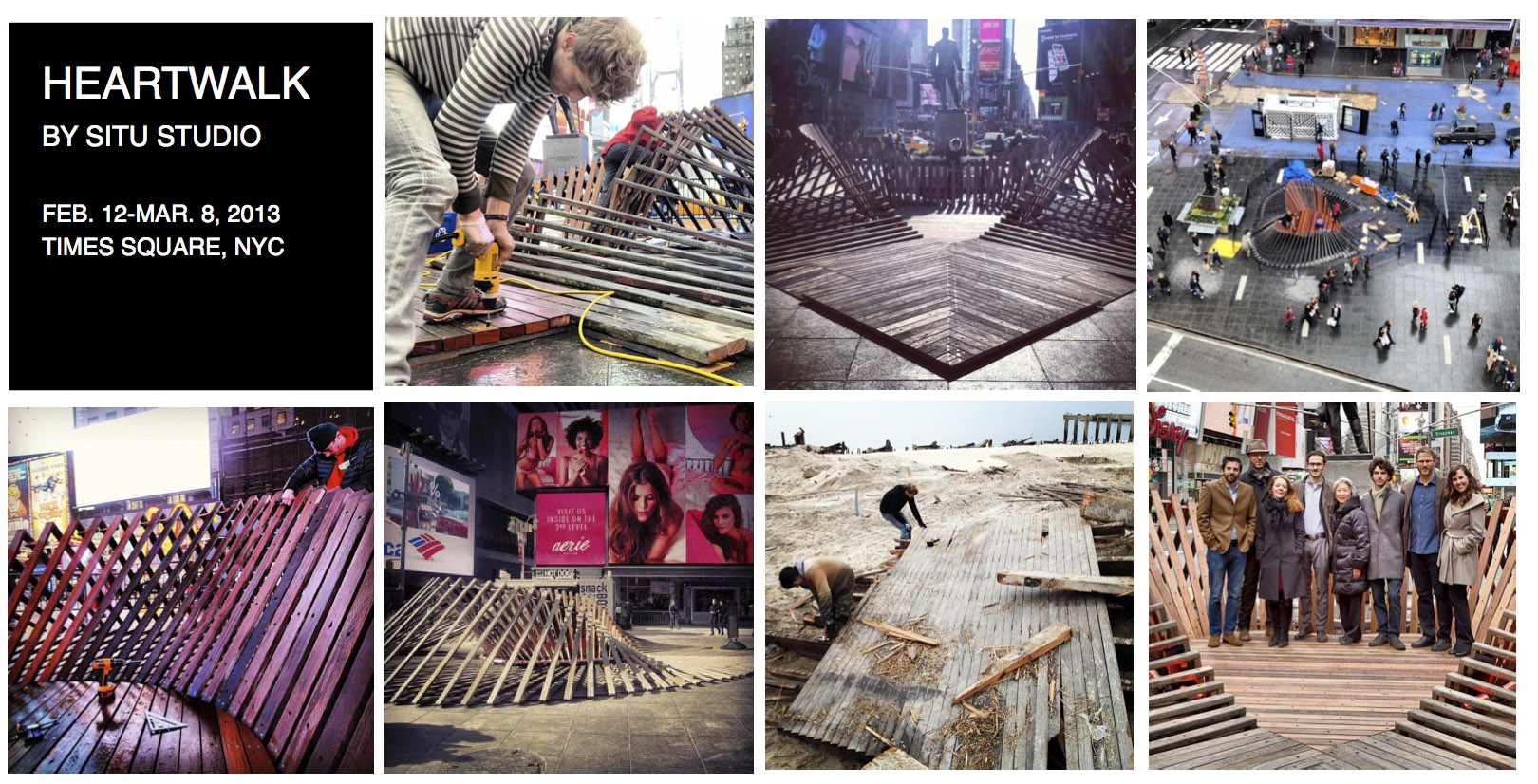 This years choice for the Times Square Valentine’s Heart Design went to Heartwalk, by Brooklyn based Situ Studio. The salvaged lumber for the heart shaped installation – some of it supplied by Sawkill Lumber Co. – was salvaged from storm damaged boardwalks at Atlantic City, Long Beach and the Rockaways.

Heartwalk, was unveiled on Tuesday, February 12, 2013, and will remain on view until March 8, 2013. The jury included Barry Bergdoll, The Museum of Modern Art; Susan Chin, Design Trust for Public Space; Sherry Dobbin, Times Square Alliance and others.

Situ Studio took inspiration from the collective experience of Hurricane Sandy and the love that binds people together during trying times. Heartwalk begins as two ribbons of wooden planks that fluidly lift from the ground to form a heart shaped enclosure in the middle of Duffy Square. Visitors can enter the installation itself and literally stand in the heart of the world’s greatest city.

“This heart is a frame for lovers and a great civic gesture commemorating the outpouring of support and help in the wake of Sandy. said Barry Bergdoll, The Philip Johnson Chief Curator of Architecture and Design, The Museum of Modern Art, and jury member. Heartwalk is a heartwarming stage on which to pause for a moment in the heart of the world’s busiest intersection—a swell of emotions that can dialogue with the TKTS pavilion and the great cacophony of Times Square.”

The dialogue may also bridge any remaining split in our thoughts about global warming. The lumber for the design was originally logged in the South American Rainforests and includes exotic tree species such as Ipe, Cumaru and Angelique – woods that are three times harder than Oak and prized for nearly supernatural resistance to rot and insects. Controversy over their use led New York City, the largest consumer of tropical woods, to essentially ban their use for boardwalks and other parks uses. The Heartwalk installation is also a hopeful response to Rainforest destruction, an expression of love and it’s powers of transformation.

Bradley Samuels, Situ Studio partner, said, “We were interested in creating a room within the city—a public space that was simultaneously interior and exterior. Taking inspiration from the collective experience of Sandy, Heartwalk is a reflection on the things that bind us together, ephemeral and permanent.”

Visit these sites for more information and public images.