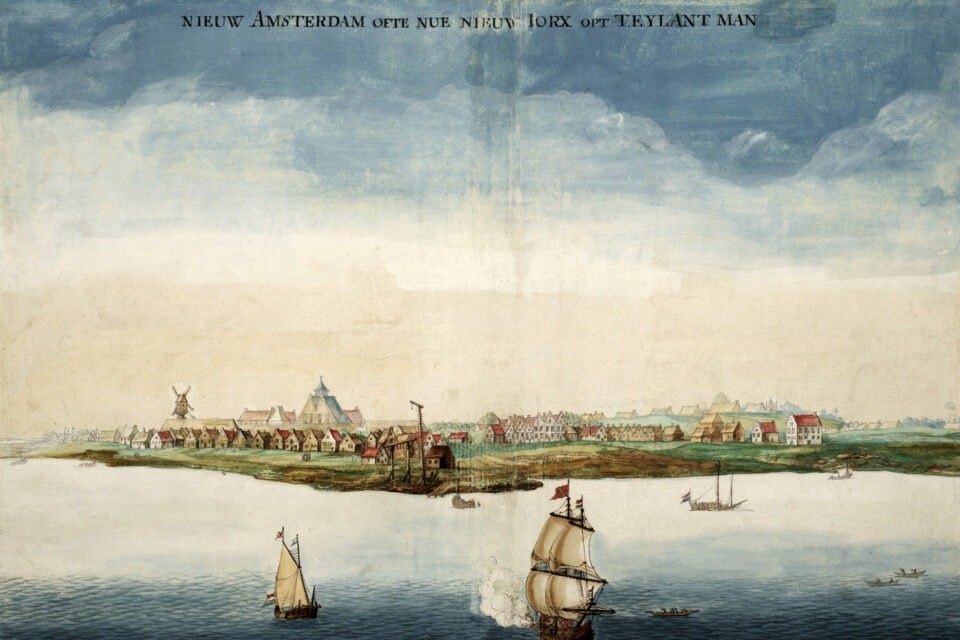 Seeing old lumber from hundreds of demolished buildings, primarily in the Northeast, we’ve discovered the species that were used in different eras and followed their paths back to their old-growth forests. Some of the wood we’re now reclaiming was in the virgin forests, growing on American soil before Christopher Columbus arrived. Native Americans had long been clearing land with fire for hunting and farming, and venerating the spirits of trees, especially the eastern white pine, or Tree of Peace .

It’s hard to overestimate the role of the forests in everyday life in North America, but, for the first Europeans, wood was of little importance to their hopes and dreams. The Pilgrims of 1620 sailed to Plymouth to gain religious freedom. The early Dutch explorers were looking for a passage to another place, farther east. The English who settled Jamestown, Virginia, in 1607 were in search of financial return, preferably gold. What they all found, revered, and then exploited was trees. The first arrivals witnessed the virgin forests rising out of the sea as they came closer to shore. In his journal of Henry Hudson’s 1609 voyage, Robert Juet admired the trees on the banks of the river that would be named for the explorer: “goodly Oakes, and Wal- nut trees, and Chest-nut trees, Ewe trees, and trees of sweet wood in great abundance.” The forests were dense and, for the most part, impenetrable by horse.

For these Dutch settlers in New Amsterdam, they offered the greatest supply of timber they’d ever seen. In the 1620s, the advanced Dutch sawmills—technology that helped drive the Dutch Golden Age—were deployed to an early logging site: the backwoods of Manhattan Island, where they constructed one of the continents first water-powered sawmill, located near today’s Central Park, along the Saw-kill (Dutch for “sawmill creek”), which is the origin of the companies name. Many of the old buildings standing in New York City, from where we harvest lumber, are framed, it’s a wonder to discover, with lumber that’s old enough to have grown at the site when it was a virgin forest. 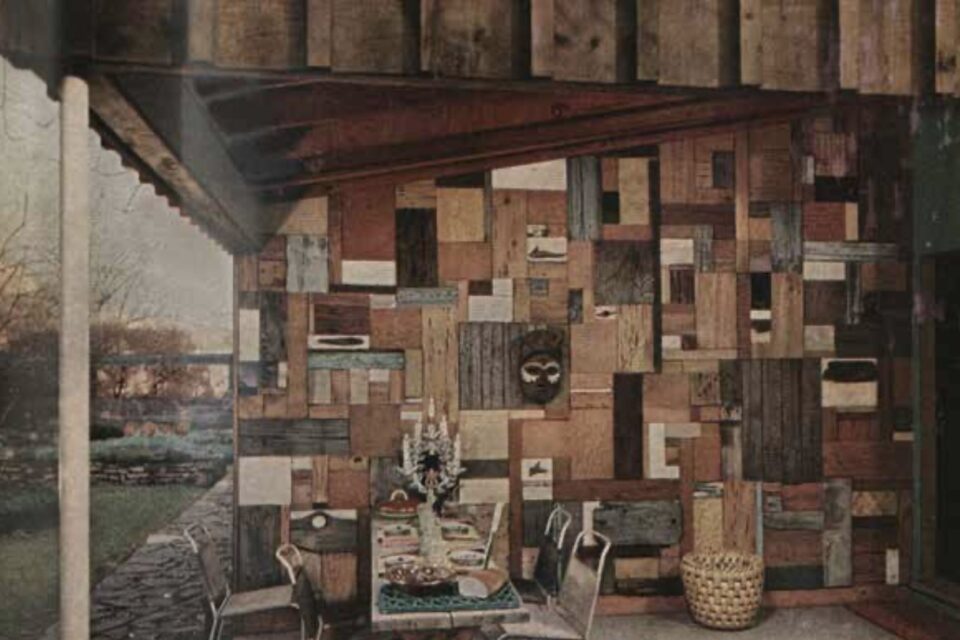 To save and salvage seems basic to human nature, from early cave dwellers to the Bible, “Beat your swords into plowshares.” The names for it have varied over time – being termed “used, “repurposed,” “scrap” and “salvaged.” For hundreds of years, a popular term was “second hand.” It suggested the passing of an object from one human hand to another—central to the idea of reclaimed wood—but demoted it to sxxecond.

But after the WWII, something was starting to happen. In the late 1950s and early 1960s, magazines like House Beautiful featured stories of homeowners who found “beauty in the junkyard,” with profiles of interiors that included recovered wood and other materials.

The use of scrap in art goes back to the collages of Pablo Picasso and Georges Braque in 1910. A quarter century later, there were the combines of Robert Rauschenberg, John Chamberlain’s welded automobile parts, and Carl Andre’s minimalist reclaimed timber sculptures. (“The wood was better before I cut it than after,” Andre said. “I did not improve it in any way.”) Art had pointed to old things’ value as symbol and elevated their aged surfaces.

The origins of today’s interest in reclaimed wood can also be traced to the counterculture of the late 1960s and early 1970s. Hippie activists launched voluntary recycling centers and co-ops and scoured used lumber yards and abandoned barns, to build and live as cheaply as possible. Books like The Whole Earth Catalog (1968) or Shelter by Lloyd Kahn (1970) spread the word.

The terms second-hand and used lumber no longer worked. Wood was being salvaged and re-manufactured, which explains how the term reclaimed wood came into use. The history of specific sites were being preserved through modern design. This was something new in the late twentieth century.

Some of the woods had been around for more than a thousand years. They’d come from virgin forests and carried the allure of old buildings. It’s a wonder that it took so long for the name to be reclaimed.

“The Wall” according to House Beautiful magazine (February 1953), “demonstrates the principle of free taste—an individual house for a very individual family.” It appears in their feature story on the home of mid-century modern designer Alexander Girard. 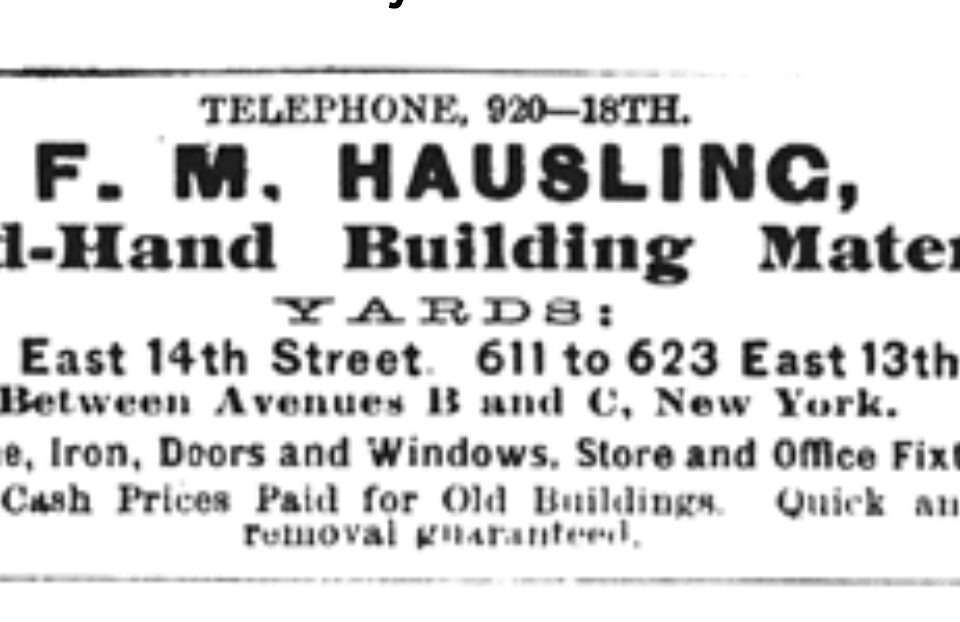 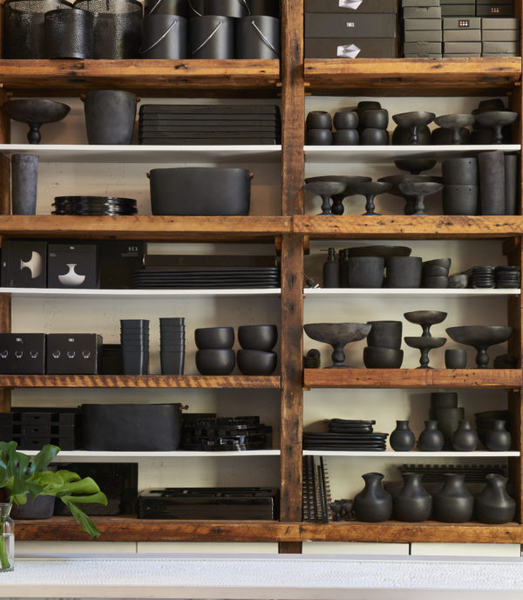 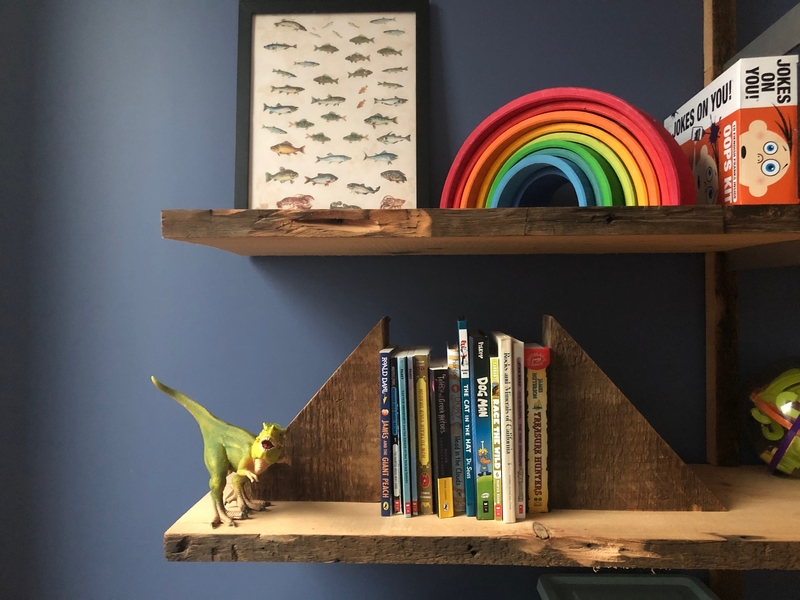 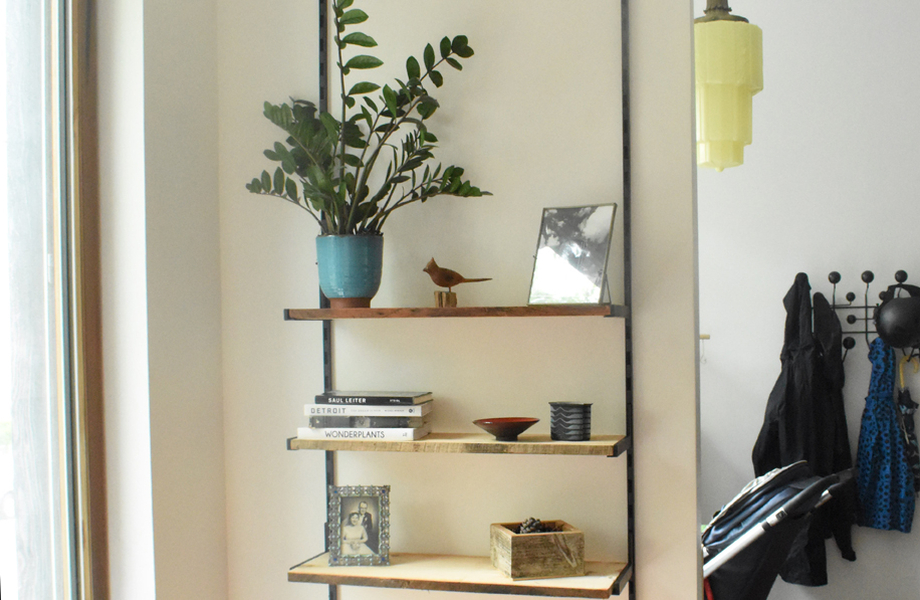 First Saturday of the month at Sawkill Lumber

This workshop covers the basics of mounting wall shelving and working with reclaimed wood. Participants gain knowledge and skills in adding shelving to improve home organization and style. We’ll look at options from basic brackets and modular standards to floating shelves. Participants gain familiarity with available tools, hardware and processes through hands-on experience. We’ll learn to prepare reclaimed wood for shelves that look the way you want.

We’ll explore the history of the woods – a journey through ancient forests, logging camps, and old buildings of all description – apartment houses and barns to 19th c. factories and uncommon ones like the Coney Island boardwalk. In salvaging old wood for new projects, we reclaim our own roots.

William Ryder is a cabinet maker with a 30 year roster of custom built woodwork in Brooklyn. Alan Solomon is a partner at Sawkill Lumber and co-author of the upcoming Reclaimed Wood: A Field Guide.

Note: At least three reclaimed options for shelving are available. Purchase of lumber for shelving at the time of the course is optional. Participants can attend for only instruction cost. 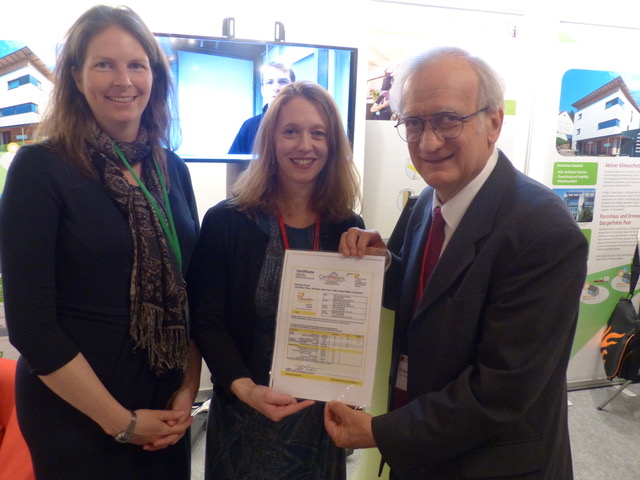 158 Clifton Place in Brooklyn, NY was passive house certified as retrofitted to the EnerPhit Standard, authorized by the Passive House Institute. Above, Dr. Wolfgang Feist, a founder of the standard, holds the certificate with PHIUS representative Sharon Gaber, at an event in Germany. Many thanks to the team that got the project over the threshold by just a point. It’s said to potentially be the oldest residential structure or wooden rowhouse in the U.S. to gain certification from the institute. The ways the residence has been heated and cooled over the eras has continued to change.

Sawkill Passive House passed the critical passive house blower door test on Friday, conducted by David White of Right Environments, working with Castrucci Architect and Blueline Construction. The house passed within just 1 CFM (Cubic Foot per Minute) of the test standards cut-off – a cliffhanger by building energy standards. Two days earlier, the reading hovered three points higher and out of reach. At that time, all the scouring for micro-leaks in the envelope of the house seemed exhausted; window gaskets were tightened, ventilation hoods tuned, electrical penetrations plugged; each step circling closer, but still short. It was unclear what to do.

But Mother Nature stepped in. Readings can vary slightly from successive tests at the same site. Within that natural range, it is also possible that varied weather conditions account for the difference. As they say, “You can’t step in the same river twice”. On Friday, with lower winds and higher temperatures, the indoor and outdoor environments were unseasonably equal, and that raised a prospect for a new and passing measure. David thought it was worth a try.

David White lives down the block from Prospect Park, and about a fifteen minute bike ride to 158 Clifton. His retro-fitted eight foot bicycle could haul the morning produce of a restaurant, but it’s more regularly strapped down with equipment from “Minneapolis Air Blower”. The bike and its cargo are easily managed by the 6’2” cyclist.

The air blower apparatus is a simple device – supported by a mountain of research. It pressurizes the entire house, but outside of a fan humming, you’d never know the blower door test was even happening. Within minutes, a computer registers dots along an axis; and then it stops for a moment, and the fan is flipped around, with air removed; and de-pressurizing, resulting in an average reading from multiple points of the  building envelope. If there are ghosts in the Victorian era row house, as an older resident on the block claimed early on, they would have certainly caught wind of the air blower test.

The computer graphic – a grid with round and square dots – often tells the story. But it was too close to call on Friday. David clicked through to the precise numerical data and paused, searching the numbers and then said “we passed.” It was just one-quarter-of-one-percent within range, and that was enough.

If it wasn’t. the alternative – which could have produced a passing number for the house months ago – was to “pressurise the neighbours”. This involved setting up similar systems that would flank the row house with pressurised volumes, and act like a headwind against microscopic air loss. Pressurizing just one adjacent house would blow the door off the standards firm threshold, lopping off 100 cfm’s, and it would be completely within the bounds of test procedure. But it was a last resort, and the neighbours of course were already a help, simply living with a party wall in a row house.

The Passive House Certification process prompted a systematic check for air and energy leakage, and a fine tuning process of actions, and it added up to real performance gains. But it was the attention to detail in the construction phase that made the difference. Going back to the bones of the 1880’s building, the old growth softwood joists; each was retained and sistered, and then subject to a thoughtful sealing sequence, with ‘no turning back’. Any energy leakage would be locked in, maybe for generations. All along the way, similar issues were encountered in a structure that was “….in as bad shape as any that I’ve encountered.” said Jim Hartin of Blueline.

Castrucci, Right Environments and Blueline have transformed an old building into one that is, 130 years later, in as good shape as any they’ve encountered. The PHI energy numbers alone may back that up.158 Clifton may also be a first wooden row house to reach certification in New York, and is part of the growing movement to retro-fit across the city.

As David was breaking down the blower door, he noticed one small part of the unit unclamped. “Hmm, that could have been another cfm or two.” 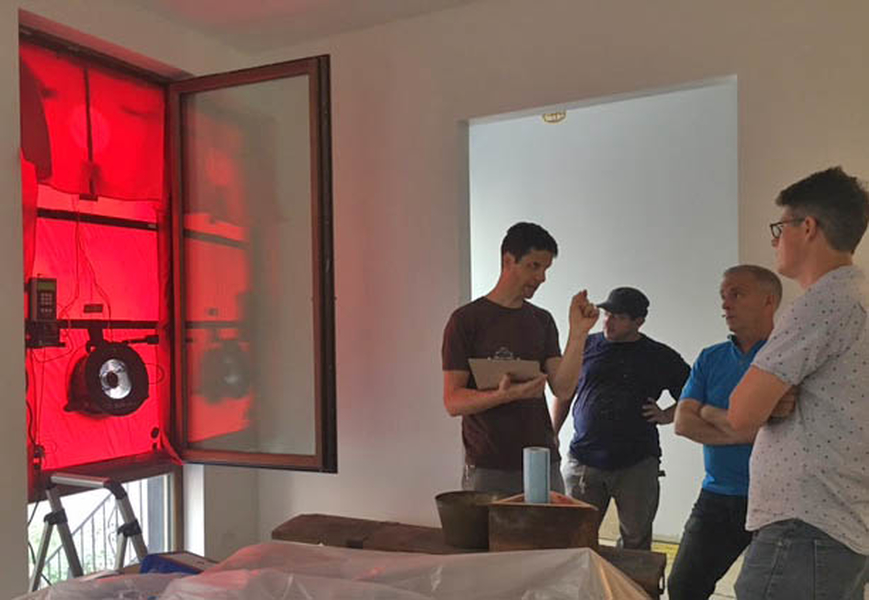 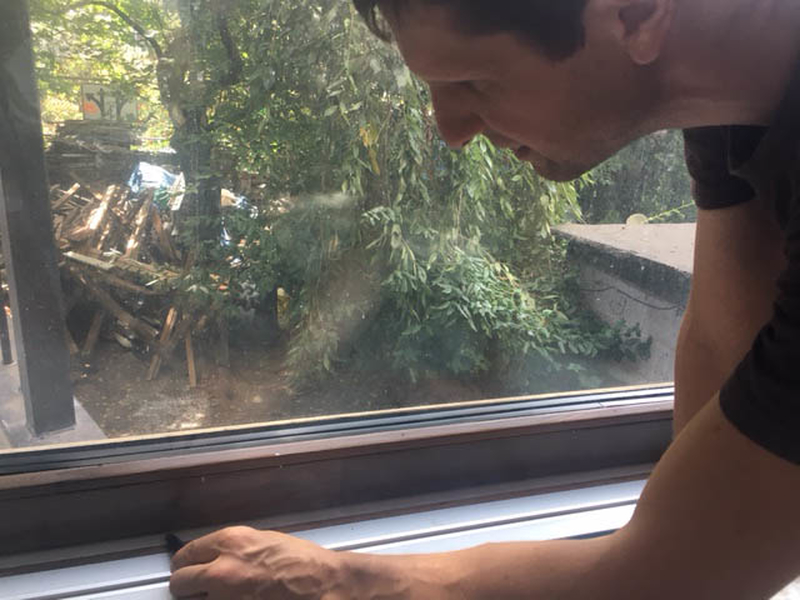 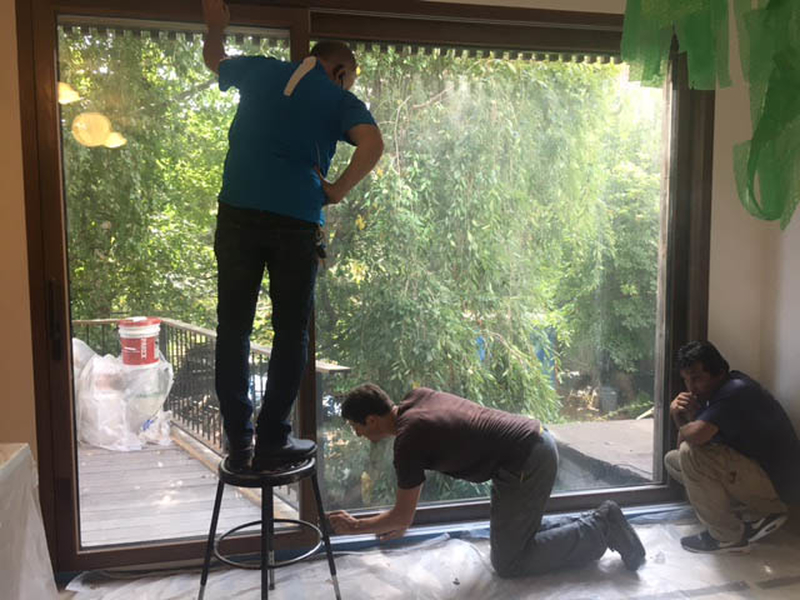 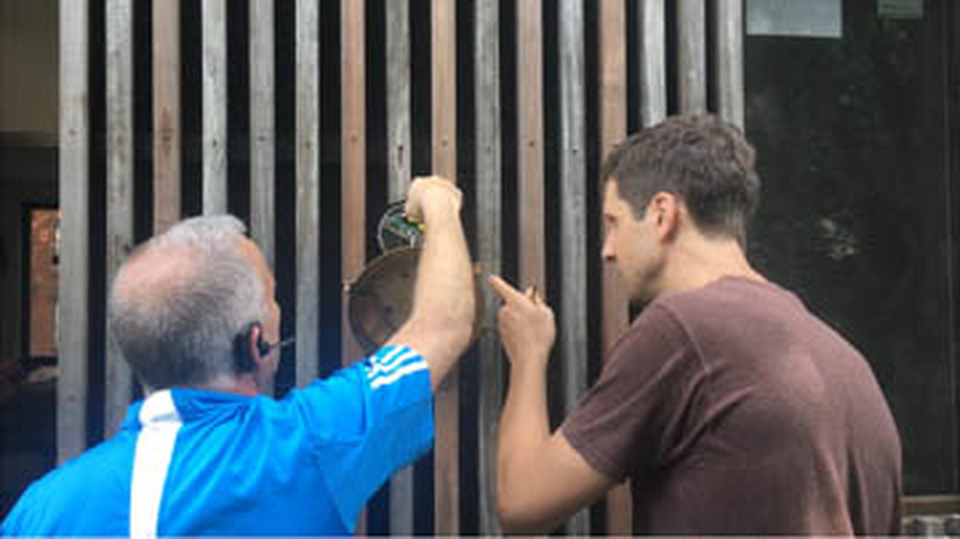 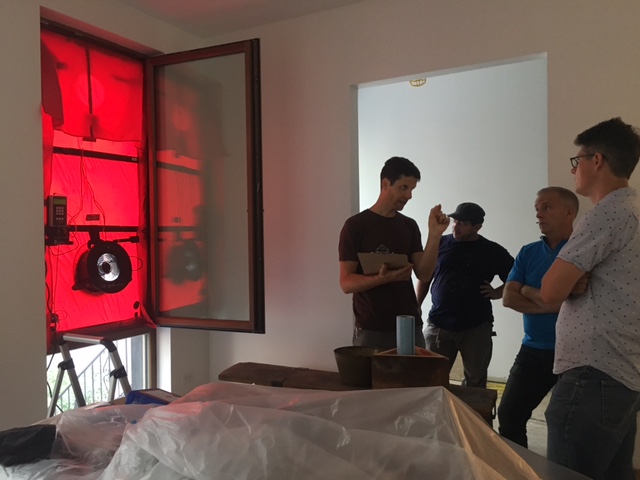 Passive House pre-test happened this week at 158 Clifton. David White, Grayson Jordan of Castrucci Architect, Jim Hartin and the crew of Blueline Construction looked to meet the Passive House Institute (PHI) tightness threshold; measured by the decisive Air Blower test. The retro-fit started over a couple of years back, with an 1887 wooden row house – “…in as bad of shape as I’ve ever seen”, related construction veteran Hartin. The project doubled down with an unlikely new building envelope –  two thousand year old Redwood windows, Worcestershire Sauce wooden tank facade cladding, and the trampled planks of the Coney Island Boardwalk as a perforated rain screen on the back.

David White, attaching a space age Air Blower to the parlor window; and utilizing a pen sized smoke sensor and European Allen wrench, proceeded with the energy test . At the outset, the house hovered 40 CFM’s over the target, with certification numbers remaining out of reach throughout the day. But the team chipped away at the high leakage reading by sealing microscopic leaks in window and door seams, ducts, electrical penetrations and consequential but previously undetected spots of energy loss. Even if a score came up short, the process was witness to the value of certification. But the final result was pass.