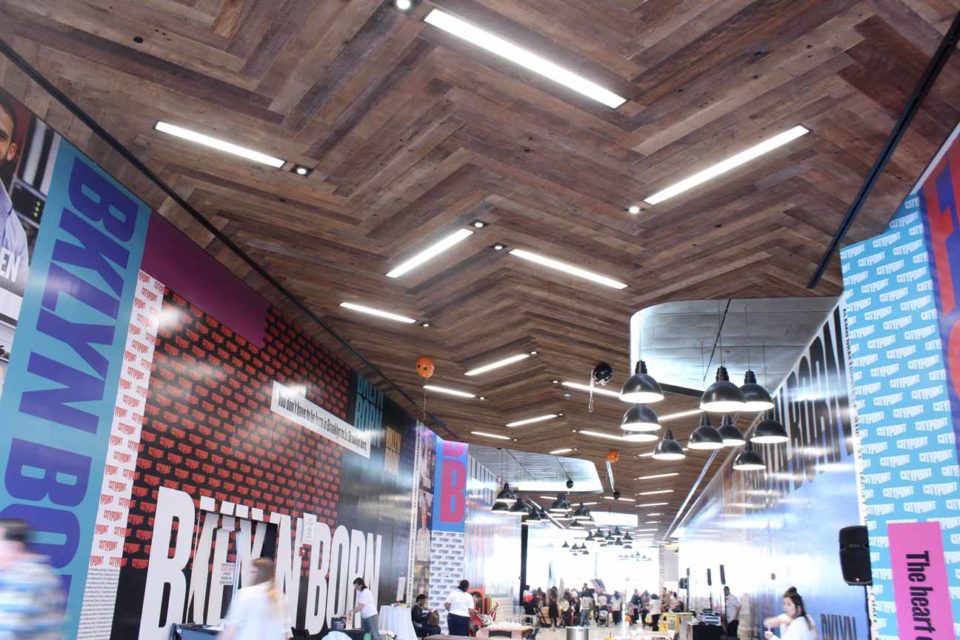 If there was a reclaimed wood as emblematic of both the new and old Brooklyn, as the rusted steel that wraps the Barclays Center, it may be the salvaged brownboard that zig zags in a herringbone form through the corridor of the new nearby City Point development. Made from a range of different antique softwoods, reclaimed primarily in the NYC area – from a Western Beef in the Bronx to a Kosher dairy facility in Bushwick – it unfolds along the five hundred foot space in broad planks – 5/8” thick x 7” wide and 8’ long. Vaulted over thirty feet in the air, the woods express some of the same rustic elegance as a brownstone facade. Though unlike a  tree lined row house block, the installation is in tension with the florescent lit space of commercial tiles and engineered panels.

An equal allure of reclaimed wood that defines the space uses a mix of salvaged and remanufactured woods from Sawkill Lumber for paneling – a patterned variation of widths and lengths made from potato farm grey board, cypress vinegar tank stock and the tropical hardwood of city boardwalks. The wash finish helps to further unify the woods as they parade across long wall stretches. Conceived by Gensler Architects, the new CityPoint is home to large and small retailers that include an Alamo theatre and Katz’s Deli.
See more >>